Kidstir Review: Is This Cooking Subscription Box Good For Toddlers? 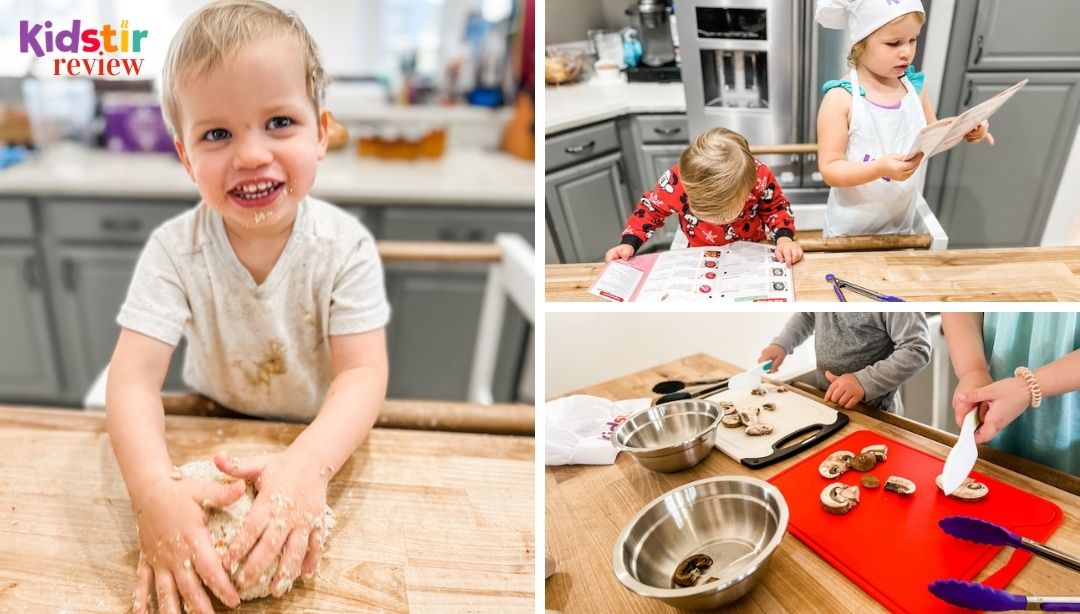 DEAL ALERT! Monti Kids is doing a very rare BOGO sale! Shop any toy sets and get a second item of equal or lesser value for 50% off! Use code MONTIBOGO. Example: Buy the 4-6m Montessori Play Set… and get the 7-9m set at 50% off! That’s over $100 in savings!! This sale ends on Valentine’s Day, so hurry up and claim it! 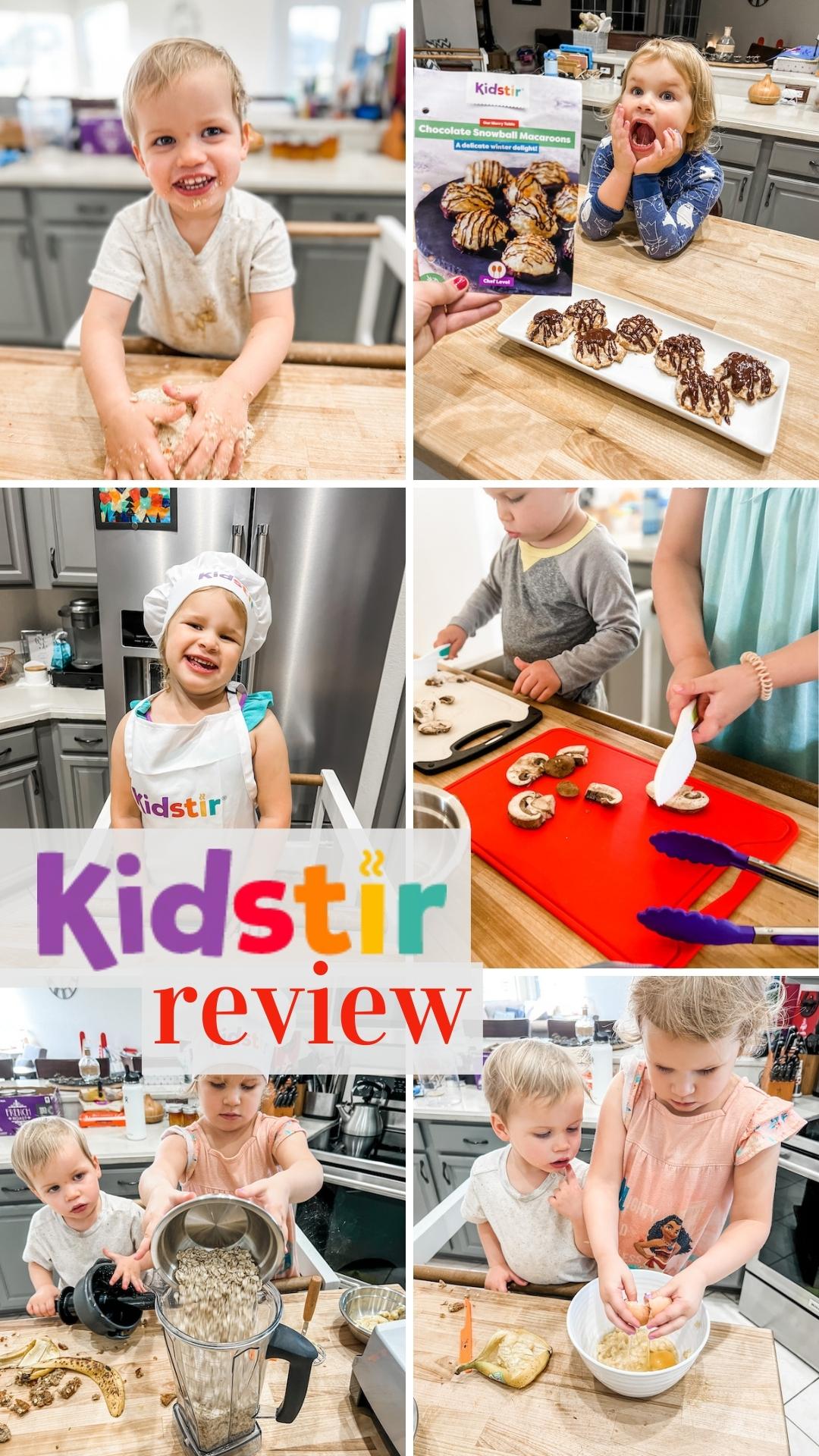 Both of my toddlers stay at home currently, so I’m always looking for new activities to keep us busy. We’ve been testing lots of different toddler-focused subscription boxes, and I was extra excited about this cooking box from Kidstir!

My kids LOVE helping in the kitchen, even if it makes a recipe take twice as long (and the kitchen gets twice as dirty). We pulled up our kitchen helper and dug into our first Kidstir box. Here’s our experience using the Kidstir recipe cards with a 2 and 3.5-year-old.

The Kidstir box comes with:

The box also comes with a little magazine, some achievement stickers, and a shopping list. But the apron, kid-friendly utensil, and recipe cards are the bulk of what you’re paying for.

What I was most interested in were the recipe cards, and I was pretty happy with them! They looked relatively simple, and they were recipes I thought my kids would actually like. The one card I didn’t quite grasp until I looked closer was “Spaghetti & Beetballs.” I didn’t realize this was a vegan take on spaghetti and meatballs until we started preparing it… I’ll give my thoughts on that later in this article.

The apron and chef’s hat were really cute, but they were more of a novelty for my kids because they wouldn’t keep it on while cooking. They may be too young for it as well (3.5 and 2 years old).

Finally, the mini tongs we got are awesome, but our pair was a bit defective in that it won’t close up. The metal component on the bottom was bent a bit, so they stay perpetually opened. I reached out to customer service about it and they sent a replacement, free of charge.

For the banana oaty muffins recipe, my kids were able to help with a lot of the steps!

Yes, the final result turned out a little messy, but this was overall a success! The recipe is healthy, and I thought it was pretty delicious.

The kids were extra excited to make these snowballs drizzled in chocolate. What a fun way to name these coconut macaroons!

They mainly helped with pouring and stirring, and of course, my son was trying to eat the concoction the entire time. 🙂

After my son went to bed, I had my daughter assist with the chocolate drizzle.

Yes, I’ll admit, I didn’t have it in me to handle the kind of mess my 2-year-old would create with melted chocolate.

These were really fun to make, and they tasted yummy, too! I was surprised they turned out like the photos, to be honest!

I also really like that this recipe is low-sugar and includes coconut. They really aren’t that sweet, but thanks to the chocolate drizzle, my kids ate them up!

This recipe card was actually listed as a bonus card, but I am SO glad it was in our box! We have a German Shepherd, Dash, and he absolutely LOVED these.

And, this may have been my kid’s favorite recipe of all. They were stoked to make treats for Dash.

Plus, it almost felt like all the pressure was off to make these taste or look good. My 2-year-old just stuck his entire hand in the mixture after he just picked his nose? Who cares! It’s for the dog! 😂

The kids helped with every step, including cracking the eggs, because again – if some shell gets in there, who cares! Dash will love it.

They mixed, poured, transferred, and rolled the dough ball. Playing with the dough was definitely my son’s favorite step.

I had to do most of the cut-outs, though I did let my kiddos take a turn. They just had trouble pressing hard enough for the cutter to go all the way through.

I didn’t have bone-shaped cutters, so we did star treats.

And these actually turned out really great! They were hard just like dog treats you’d buy, and our dog was obsessed with them. He would do anything for one of these treats – even go get in his crate. That’s really saying something.

Last but not least is the Spaghetti & Beetballs recipe. This one really threw me for a loop, because I didn’t realize it said “beetballs” for the longest time.

I have nothing against vegan versions of recipes, but I can’t say I was thrilled to make veggie meatballs out of beets and mushrooms.

I did get the kid’s station all set up and had pretty high hopes.

But… I did not like this recipe for a multitude of reasons.

After we finished the recipe and I got the massive mess cleaned up, I told my husband it was one of the worst experiences ever. But then I look back on the photos I took and saw how happy my kids were, and it gave me a little perspective.

I’m glad we did it. And I’m glad my kids had so much fun.

But I’m not sure I can handle another beetballs recipe. (Just being honest.)

Tips For Doing Kidstir With 2-3 Year-Olds

Cooking subscription boxes for kids are typically recommended for ages 5+. At this age, they’re much handier in the kitchen and can be involved in more of the steps.

Kidstir actually promotes their boxes for ages 4-14, but I have two toddlers, ages 2 and 3.5.

While our family isn’t 100% Montessori, we do follow many Montessori principles, one of which is involving our kids in real-life tasks, like cooking and cleaning (and making these things accessible to them).

If you want your toddlers as young as 2 to help in the kitchen, you might be eyeing these subscription kits!

Here are some tips to consider before you go purchase the subscription:

It is SO easy to get frustrated when you know you could finish a recipe in 10 minutes but it’s going to take 30 minutes when you involve your kids. Try to channel your inner zen and set aside extra time to involve the kids. I don’t recommend involving them if you have a time crunch. Make this a mid-day activity if you can!

Anytime you get a 2-year-old in the kitchen, there is going to be a mess. Again, expect it. Embrace it. Let it happen. And when you’re done, get the kids started on another independent activity so you can clean it all up.

A 5, 6, or 7-year-old could probably help with most or all of the steps in this box. However, some of it was a little too advanced (or dangerous) for my toddlers.

Before we started a recipe together, I would read through it and do some of the steps myself before bringing in the kids.

As an example, for the macarons, I did the hand mixer part, but I did let my kids do the pouring and additional mixing.

Toddlers love to mix, pour, cut (with a kid-safe knife), and transfer. Any time this is needed in a recipe, bring in the kids! Even if it’s not conducive to completing the recipe, you can still make it part of the fun.

For example, set up two bowls and have your 2-year-old practice pouring your oats from one bowl to the other. They will love it!

So, is Kidstir appropriate for toddlers? I’d say yes! We really enjoyed it, and there are 3-4 recipe cards for the whole month, so you can space it out if the mess and patience required is a stressful experience for you.

Here’s the verdict: Kidstir is 100% worth it for families with toddlers as long as you can be patient and are OK with a messy kitchen.

It felt like a bit of work on my part, but toddlers learn SO much when you involve them in the kitchen. There are lots of STEM lessons happening, from counting to measuring to observing.

It’s fun and educational for your little ones, and hey, they may grow up to be one heck of a cook after helping you in the kitchen at such a young age.

Give Kidstir a try and let me know how it goes with your little ones. You can use code tmb10 for 10% off! 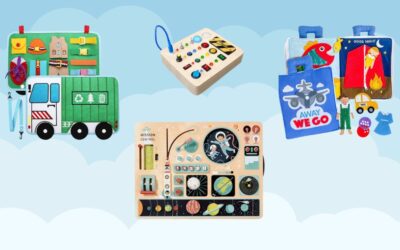 If you’ve never met a busy board, your life is about to change. Do you long for peaceful car rides? The ability to make dinner? Just a need for the kids to be focused on something other than, well,... 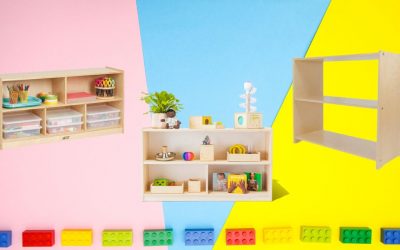 Montessori shelves are perfect for displaying toys and books for your infant or toddler. They typically have cubbies that hold different-sized toys, and the shelves are easily accessible for those... 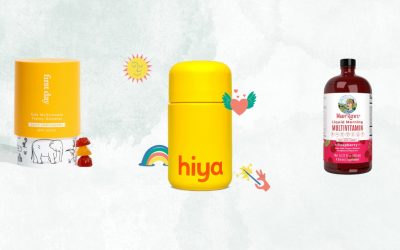 8 Best Toddler Multivitamins on the Market (2023)

I first started researching toddler vitamins when my daughter turned two and entered a picky eating stage. She was living off noodles and bread, refusing all the foods she once loved. I, like many...