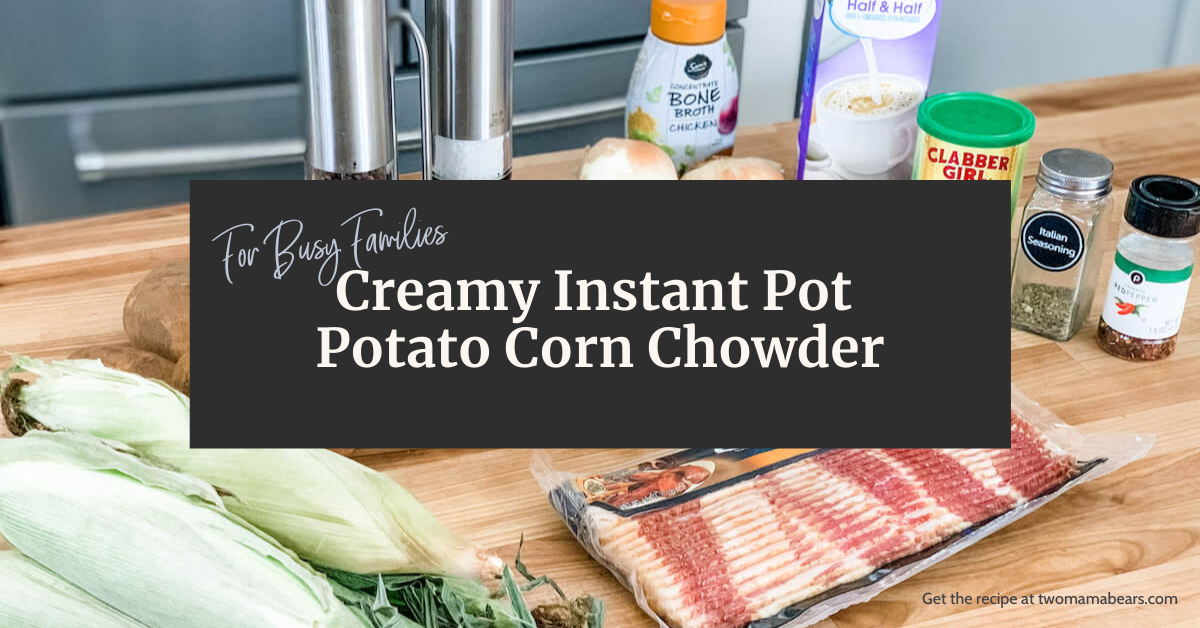 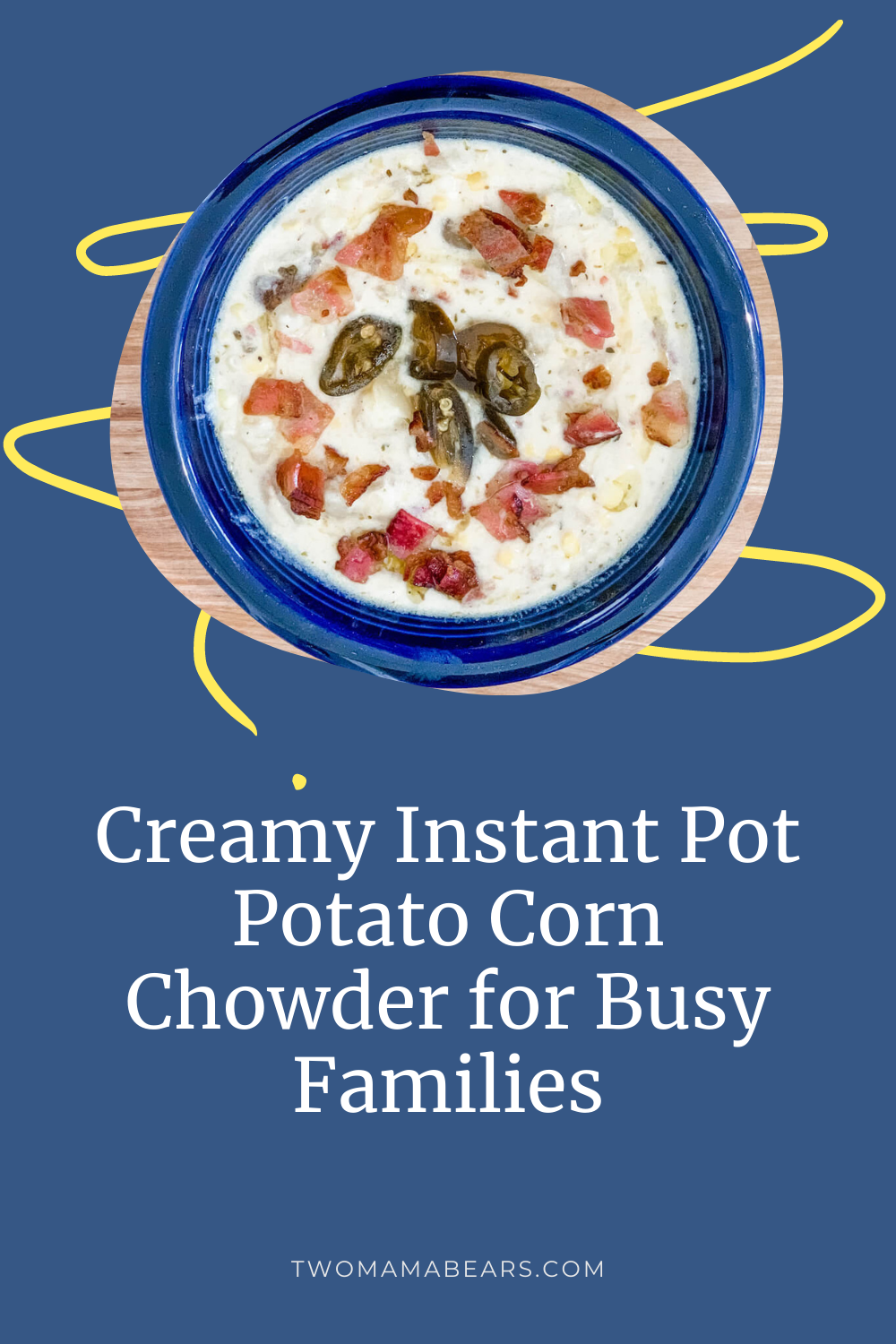 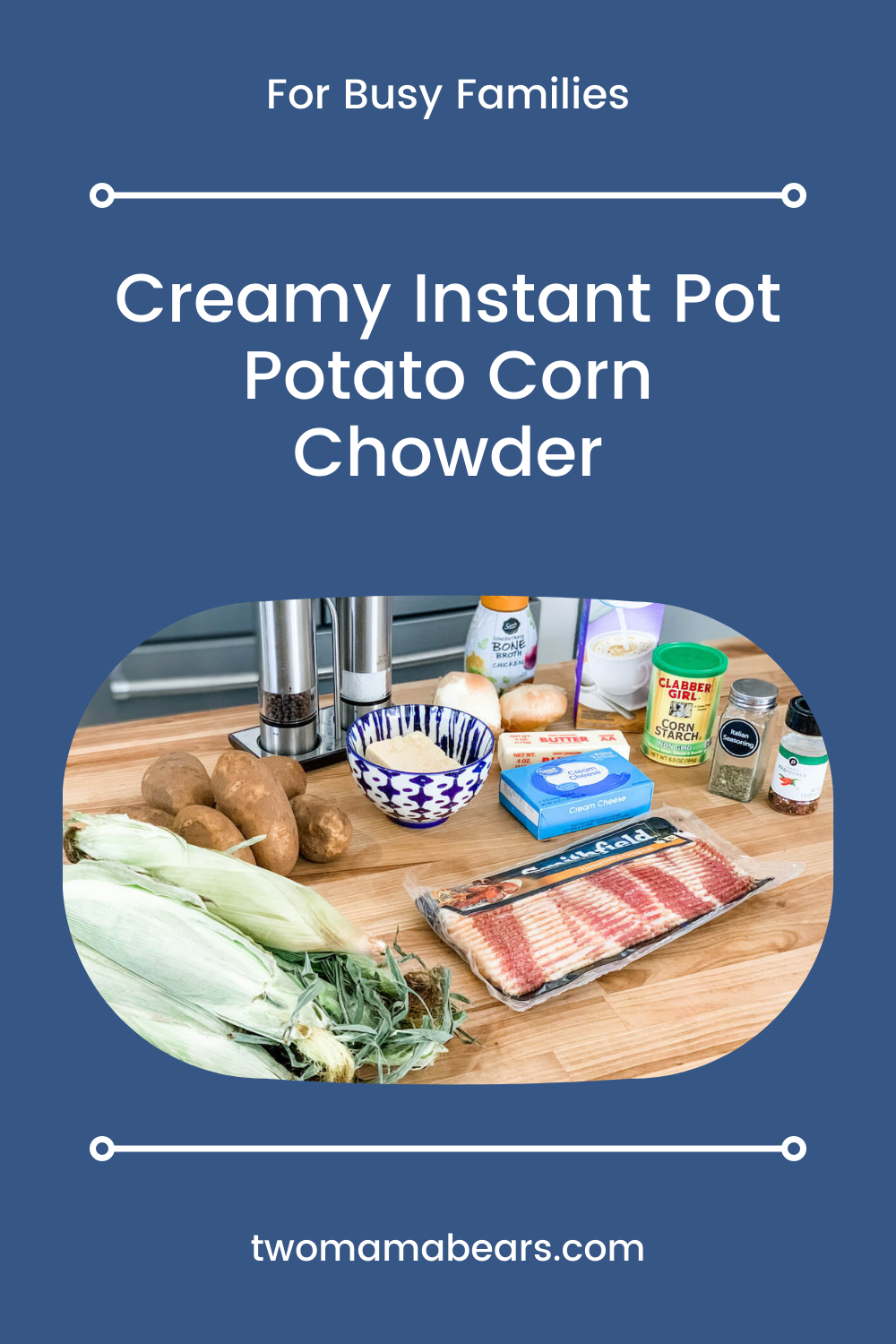 My husband has never been a fan of soups, but this Potato Corn Chowder defied all odds because he liked it!

It’s creamy, it has bacon in it, and it’s made in the Instant Pot. Check, check, and check.

The star of this Potato Corn Chowder is the fresh corn on the cob – it adds so much freshness to the soup, and the “pop” you get from the fresh corn just doesn’t compare to its frozen counterpart.

Perfect for summer, this Instant Pot Potato Corn Chowder recipe is husband-approved, kid-friendly, and endorsed by this busy mom.

Unless I’m baking, almost all of the recipes I develop are flexible, meaning you can scale ingredients up and down, make substitutions, and adapt the recipe to make it work for your family.

I’m a huge advocate of using what you have on hand, so I’m including ideas and options for swapping out ingredients and how to modify the recipe, so it’s still equally delicious!

Here’s what you’ll need for this creamy potato corn chowder, developed for the Instant Pot:

Instant pot recipes are the best because you only dirty one dish while you’re cooking. I researched Instant Pots to death (and actually tried another brand in the past), and I can say without hesitation that the Instant Pot Duo Plus 6-quart is THE BEST. It’s the perfect size, and it works perfectly every single time.

Another stand-out piece of equipment for this recipe is the sheet pan with a wire rack used for crisping up the bacon. My husband gave me a Williams Sonoma Goldtouch® baking set for Christmas, and I’m a die-hard fan.

Besides those two things, you just need basic kitchen stuff, including:

Check out: 30 Gift Ideas Under $25 for Moms Who Love to Cook

How to Make Potato Corn Chowder In the Instant Pot

The basic steps for this Instant Pot Potato Corn Chowder include:

The steps are straightforward – honestly, the longest part of this recipe is just waiting for the Instant Pot to do its thing! And that’s why I love Instant Pot recipes so much, especially as a working mom with young kids. I can tidy up the living room and play with my kids while the Instant Pot does all the work.

I start by preheating my oven to 400º F. I place my bacon on a wire rack and set it on a full-size baking sheet. You can fit nine pieces of bacon on this setup, so that’s how I wrote the recipe!

Note: I don’t recommend sauteeing the bacon in the Instant Pot. There’s not enough room for the strips of bacon, and it heats unevenly, so parts of your bacon will get burnt. It’s a lot faster and easier to bake it in my experience.

While you’re waiting for the oven to preheat, prep your fresh ingredients. Chop the onion, do a thick dice on the potatoes, and cut the corn off the cobs.

When you’re about done chopping, put the butter in the Instant Pot until it’s melted and bubbling. Add your diced onion and cook for about 3-4 minutes, or until it’s soft and starting to get browned on the edges.

Add your minced garlic and seasonings.

When you can smell the seasonings, and you’re starting to panic that everything will burn, add your potatoes and corn. Mix well. The veggies will let off some moisture, stopping the bits at the bottom from burning.

When everything is mixed well, deglaze the pot with chicken stock and wine. Scrape up the bits at the bottom and mix well. 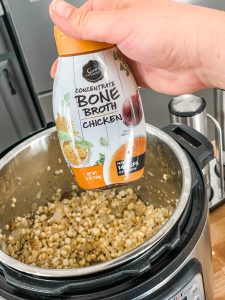 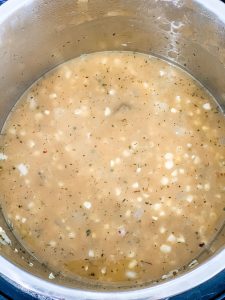 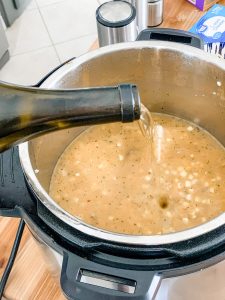 Season with salt and pepper and set the Instant Pot to high pressure for 4 minutes.

When the timer goes off, wait 5 minutes before releasing pressure. Take off the lid when it’s done letting off steam, and set the Instant Pot to Saute.

Add all of your thickeners – the cream cheese, half and half, and cheese.

I like to add some of the soup mixture to the cornstarch, then add it all back into the soup.

Mix everything together. When everything is melted and delicious-looking, chop up about half of the bacon, mix it in, and serve!

How to Serve Potato Corn Chowder

I like this chowder with more chopped bacon and some candied jalapenos on top. I also drizzled a little olive oil around the corners, but it didn’t really add any flavor. It just looked a little prettier for the photos. (I tried.)

How to Make This Potato Corn Chowder Vegan

This recipe is also on MyFitnessPal if you need to log it! Search for “Two Mama Bears Creamy Instant Pot Potato Corn Chowder Recipe” or visit https://www.myfitnesspal.com/recipe/view/265692917960637. 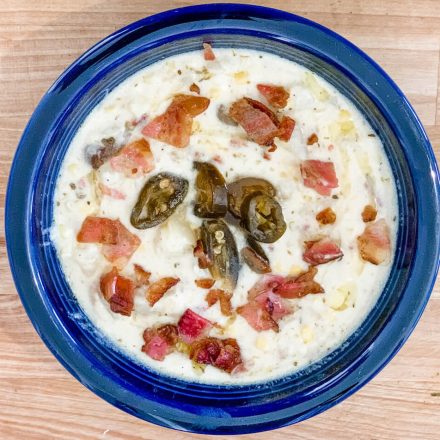 You can sub in frozen corn instead of fresh corn, especially if you’re in a hurry. You’ll need about 4.5 cups of frozen corn, or about 24 oz. Instead of cooking it on high pressure with the rest of the ingredients, you’d add it at the end to warm it up, along with the cream cheese, half and half, and cheese.
Keyword Corn Chowder, Instant Pot

Instant Pot recipes never cease to amaze me – they cook a meal that smells and tastes like it’s been simmering on the stove all day long.

If you try this potato corn chowder recipe, please comment with a photo in our comment section below! Thanks for reading! 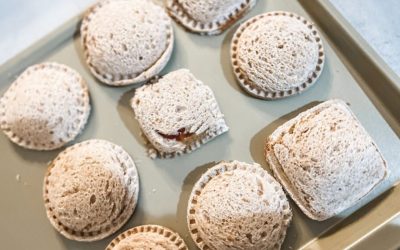 Uncrustable Makers Review: Which Is the Best Sandwich Sealer?

I’m late to the make-your-own-Uncrustables game, but I’m here. And the first thing I realized is there are a lot of Uncrustable maker contraptions – ahem, sandwich sealers – on the internet, and I... 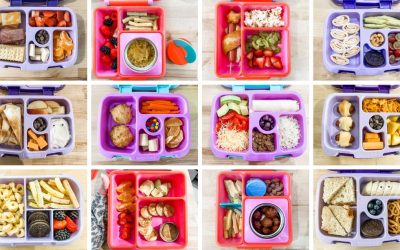 My daughter started preschool recently, and my first concern was: what the heck am I going to pack her for lunch?  She’s a bit of a picky eater (it started around age 2 – don’t get me... 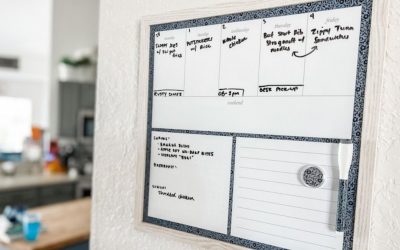 When I was young, I only ever dreamed of being older. The independence, the freedom… I couldn’t wait! But little did I know that a huge portion of my life would be planning for and preparing food....